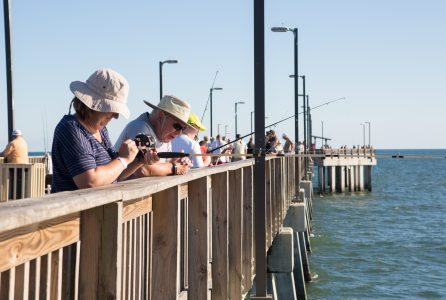 Some visitors to Alabama prefer to try their luck and skill fishing off a pier that stretches 1,540 foot over the Gulf of Mexico’s water.

My first thought was that I must have taken a wrong turn. Surely this couldn’t be the destination known as Gulf Shores and Orange Beach, perched on the Gulf coast of Alabama. That place is known for its for long stretches of magnificent sand and expanses of unspoiled nature.

I was driving by a long line of high-rise condominium buildings that seemed to be competing for the title of most glitzy. Restaurants ranging from gourmet elegant to beach-dive casual tempted hungry passers-by.

It wasn’t long, though, before I understood. I was in a something-for-everyone kind of place. Gulf Shores and Orange Beach present a complex face to the world. It combines the usual list of to-do’s and to-see’s which are available at many sun-and-sand destinations with a number of add-ons, including some which are unique to the area. 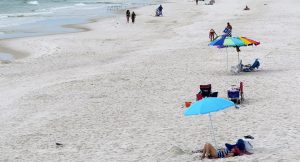 Beach tourism is the reason why many people visit Gulf Shores

Those who like to commune with Mother Nature have plenty of ways to do so. Active types may choose from a long and varied list of pursuits. Even folks seeking new learning experiences can drop by museums devoted to a diversity of topics. Enhancing the mix is what many locals consider to be the best state park in Alabama — of the 22 which are there.

Granted, beach tourism is the reason why many people visit Gulf Shores, a town of about 12,000 residents; Orange Beach, where about half that number of people live; and the sun-drenched area surrounding them. Sun-seekers find 32 miles of pristine white quartz sand lapped by the blue-green waters of the Gulf of Mexico.

Actually, the beachfront consists of several sections which span different locations. Both Gulf Shores and Orange Beach have eight miles of beachfront. Gulf State Park encompasses two miles — more about that later — and Fort Morgan has a seashore which stretches 14 miles.

Pentagon-shaped Fort Morgan was completed in 1834 and named for a hero of the Revolutionary War. The masonry structure, which occupies a strategic location where Mobile Bay meets the Gulf of Mexico, was built to strengthen the coastal defense of the United States following the War of 1812. 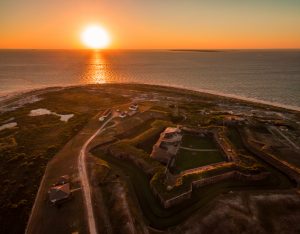 The expansive site contains historic military buildings, artillery batteries that were constructed between 1895 and 1904 and a museum with exhibits of uniforms, weapons, photographs and letters written by soldiers who served there. A living history program interprets the various military periods in the fort’s active life. To top it off, the setting fronts the same kind of broad, gentle snow-hued beach which is characteristic of the area.

While Gulf State Park is home to the shortest stretch of beach in the area, its popularity is well deserved. The nine distinct ecosystems nestled in its 6,000-plus acres include pine forests, coastal hardwood swamps and freshwater marshes. Boggy streams and three spring-fed lakes are among the water features.

A backcountry trail complex, which is accessible to people with varying abilities, stretches for 28 miles. Hikers may spot white-tailed deer, an alligator basking in the sun and even a bobcat looking for its dinner. They’re less likely to see an Alabama beach mouse, a locally loved, endangered animal that lives only in this area. The tiny light-colored rodents nest in dunes and are active mostly at night.

A more colorful display of animal life is presented at the butterfly garden located in the park. Boating and fishing are available and, for those seeking modest accommodations, there are cabins, cottages and campsites.

Visitors seeking an even more extensive selection of activities also are in luck. The list is as eclectic as it is long, and includes some delightful surprises.

Kayaking and paddle boarding attract people of all ages. Dinner, sunset and dolphin-watching cruises appeal to those who prefer to take to the sea without any effort.

Lake and ocean fishing tempt anglers. Some prefer to try their luck and skill off a pier that stretches 1,540 foot over the Gulf of Mexico’s water.

Snorkelers and divers who would rather be in, than above, the water also find much to like. A series of artificial reefs provides experiences geared to everyone from children and beginners to advanced divers.

Golfers no doubt would much prefer to avoid water holes on any of the 14 courses which are in the immediate area or within an hour’s drive. Two, Craft Farms and Kiva Dunes, have ranked high on Golf Digest“best courses” lists.

Out Of The Sun 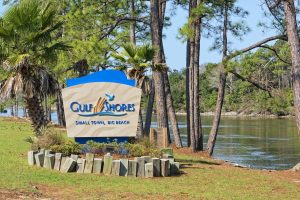 People who prefer indoor pursuits or who may be seeking to pass time out of the sun, also are in luck. Small local museums provide insight into the region’s history and character.

A good place to start is the Gulf Shores Museum which, appropriately, is located in a pre-World War II beach house. Permanent exhibits tell the story of 19th century settlers in the area and of hurricanes, including how they originate and how a community rebuilds from their destruction. Rotating displays deal with such topics as items found in a local 1976 time capsule and coastal defenses during World War II.

In keeping with its name, the Orange Beach Indian & Sea Museum provides introductions to the area’s Native American and fishing heritages. The USS Alabama at Battleship Memorial Park, about an hour drive away in Mobile, is home to the massive ship which saw action for 37 months during World War II, a World War I submarine and a collection of historic aircraft.

An hour drive in the other direction leads to the National Museum of Naval Aviation in Pensacola, Fla., the largest naval aviation museum in the world. Despite its name, the collection of more than 250 aircraft represents every military branch. The complex also is home to the famous Blue Angels, the aerobatic team of Navy and Marine aviators who thrill onlookers with their literal flights of fancy.

Battle ships and historic airplanes, golf and a Gulf-related museum would seem to have little in common with an inviting beach destination. That’s especially true of one which has been recognized and highly ranked in “Best of” lists compiled by the likes of USA Today,Reader’sDigest and Travel + Leisure.

That’s the point. Inclusion on “Top 10,” “Best Places” and “Most Beautiful” lists is based upon the magnificent stretches of beach as well as the long list of other attractions that the Gulf Coast and Orange Beach offers those who go there. As one repeat visitor told me, “I came here the first time for the beaches. Now I return for everything else.”

For more information about Gulf Shores and Orange Beach, visit gulfshores.com or call 800-745-7263.

Thu Jul 25 , 2019
Mike Garten Our fragrant Indian-style traditional chicken curry is savory and complex: Garlic, ginger, onion, and spices all contribute to the flavor, yet you can still get it on the table in 30 minutes. One secret: the garam masala, a spice blend typically consisting of cardamom, cinnamon, coriander, black pepper, […]