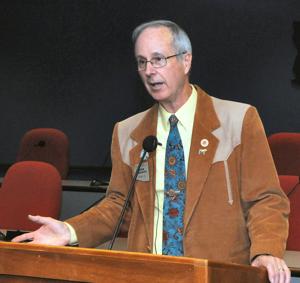 Secretary of State Katie Hobbs, who is the state’s chief election official, said what Thorpe is proposing works against what she has been trying to do.

“We have a pretty clear record here in my office of working to try to engage students — make it easier for them to be able to register to vote in the place that they choose to do so,” she said. And Hobbs, a Democrat, said having students be able to vote where they go to school — and where they spend most of the year — “helps them be more engaged in their communities here.”

“I don’t know why we wouldn’t be encouraging that,” she said.

This isn’t a partisan issue.

When Thorpe tried this several years ago, her predecessor, Republican Michele Reagan, said her office also was “committed to make it easier for students to register to vote.” And Reagan said she was working with Arizona State University, the Arizona Public Interest Research Group and Rock the Vote on a project to encourage students to register to vote when they are registering for class.

Hobbs also said that Thorpe’s legislation is built on what may be a fiction about students, citing the example of her own son, Sam Goodman, a student in his third year at Arizona State University in Tempe.

For the first year, Hobbs said, her son lived in a dorm. And she had the expectation that he would return to the family home in Phoenix.

Fri Jun 21 , 2019
INDIANAPOLIS — Roger Penske already is making changes at Indianapolis Motor Speedway. It looks like more are on the way, too. On Wednesday, in his first major move since buying the iconic facility, Penske announced the NASCAR Xfinity Series race at Indy on July 4 will use the track’s road […]