Google has launched the Pixel 7 and the Pixel 7 Pro at their Made By Google event, along with a hoard of new devices. The Pixel 7 series is powered by the new Tensor G2 SoC, which has been made using the 4nm process. Both, the Pixel 7 and the Pixel 7 Pro come with a hoard of new features and hardware. The highlight is the new Tensor G2 SoC. | Image Credit: Google

One of the key highlights from the launch is the fact that Google has announced a bunch of new camera features for the Pixel 7 series. Both the devices in the Pixel 7 series now support a new ‘Cinematic Blur’ feature that provides a dramatic blur effect when recording videos, much like Apple’s Cinematic Mode.

The top-tier Pixel 7 Pro will also have a ‘Macro Focus’ feature that allows users to click photos of objects up to 3cm away with HDR+ photo quality. But the best feature that the photography department gets, is the ‘Photo Unblur’ feature on Google Photos, which uses machine learning to improve old, or blurry pictures.

We take a look at the features, pricing and availability of the Pixel 7 series.

Google Pixel 7: Specifications, pricing and feature
The Google Pixel 7 comes with a 6.32-inch full-HD+ OLED display with a 90Hz refresh rate. The device is paired with the new octacore Tensor G2 SoC, paired with 8GB of RAM and up to 256GB of storage. 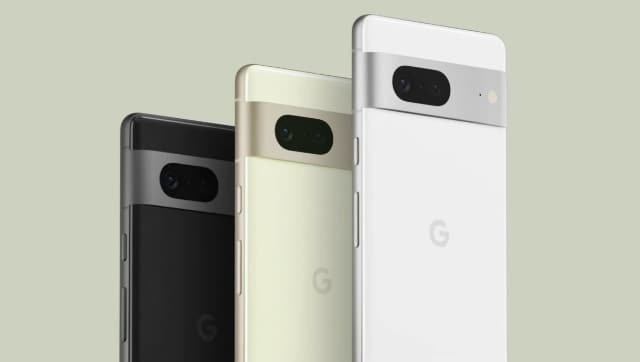 The Google Pixel 7 has been reduced in size, and as a result, Google has also reduced the battery capacity on the new device. The Pixel 7 packs a 4355mAh battery, which supports 30W fast charging and 21W wireless charging. It also supports reverse wireless charging.

The Pixel 7 will run on a clean, or stock version of Android 13. Users get an in-display fingerprint sensor, as well as support for face unlock for biometric authentication.

Google Pixel 7 pricing starts at Rs. 59,999. The smartphone will be sold in Snow, Obsidian, and Lemongrass colour options. Offers from banks and cashback offers will bring down the price by Rs 10,000 to Rs 49,999.

Google Pixel 7 Pro: Specifications, pricing and feature
The top tier Google Pixel 7 Pro comes with a 6.7-inch Quad-HD LTPO OLED display with a 120Hz refresh rate. The Pixel 7 Pro is powered by the same octacore Tensor G2 SoC that we see in the non-Pro Pixel 7, but instead of the Pixel 7’s 8GB of RAM, the Pixel 7 Pro gets 12GB RAM. For storage, we get up to 256GB of the same storage module. The Pixel 7 Pro gets an additional 48MP camera with added features, and 12GB RAM over the vanilla Pixel 7 and is priced at Rs 84,999. | Image Credit: Google

For the cameras, the Google Pixel 7 Pro gets a triple rear camera setup consisting a 50MP primary sensor, a 48MP telephoto camera with support for 30x Super Resolution Zoom and 5x optical zoom, and a 12MP ultra-wide angle camera. The Google Pixel 7 Pro also features a 10.8MP front-facing camera for selfies and video calls. The Pixel 7 Pro will feature a new ‘Macro Focus’ feature that allows users to take photos of subjects just 3cm away.

The Google Pixel 7 Pro is priced at Rs. 84,999. It will be available in Hazel, Obsidian, and Snow colour options. Google is also giving a number of bank offers as well as a cashback of Rs 8,500 on the Pixel 7 Pro.

Fri Oct 7 , 2022
Last week Magnus Carlsen, the world chess champion, directly accused Hans Niemann, a U.S. grandmaster, of cheating during their game at the Sinquefield Cup, in St. Louis, Mo. He thus made plain an accusation he had been hinting at for weeks. Carlsen has so far provided no evidence to back […]