The slowdown, which has become more severe since the economy peaked in 2011 following years of double-digit growth, rippled through many sectors of the Chinese economy last year and was made worse by the Trump administration’s trade pressure and tariffs.

Even so, the growth rate of 6.1%, down from a revised 6.6% rate for 2018, fell within the government’s target of 6% to 6.5% for 2019. China’s official statistics bureau described the national economy as being “generally stable” last year. The economy grew 6% in the fourth quarter. 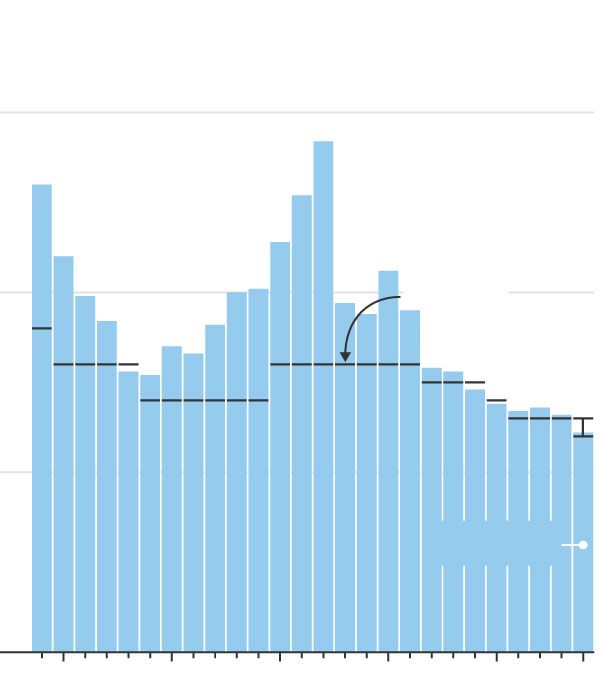 change from a year earlier

Beijing’s main development targets were met, the National Bureau of Statistics said in its economic report Friday, which it said “laid a solid foundation for completing the building of a moderately prosperous society,” invoking a favored term of President

to describe his goal of building a solid middle class.

The continuing downshift wasn’t unexpected, given how large China’s economy had become. But it also reflects the degree to which debt helped fuel China’s extraordinary growth. Beijing continued its campaign against high debt levels last year, with some success.

Trade tensions with the U.S. also damaged China’s business confidence throughout the year. Economists say China’s economy will benefit only to a limited degree from a trade agreement signed by the two countries this week.

Incomes grew more slowly than the economy did last year, 5.8%, while rising inflation—made worse by higher pork prices—crimped purchasing power. An outbreak of African swine fever roughly doubled the price of pork at certain points during the year as the virus forced farmers to kill off at least a quarter of the nation’s hog population. Pork is the most consumed meat in China.

Government-led stimulus is becoming increasingly apparent in economic figures and anecdotal signs of new projects in China and authorities say they are working to lower borrowing costs. But they have also refrained from flooding the economy with money that might have adverse effects in other sectors of the economy—for example, further inflating the value of homes.

Late last year, China’s economic activity rebounded nearly across the board, reflecting greater efforts by Beijing to stabilize growth and ease trade tensions with the U.S.

In December, value-added industrial output in China rose 6.9% from a year earlier, accelerating from 6.2% in the previous month. The December figures exceeded a median forecast for a 5.9% increase, according to a poll of 15 economists that was conducted by The Wall Street Journal.

Retail sales climbed 8% in December from a year earlier, compared with November’s 8% increase; that topped the Journal poll’s median forecast for 7.8% growth.

Fixed-asset investment in China’s urban areas, meanwhile, rose 5.4% for the full year of 2019 from a year earlier. Growth in closely watched construction activity exceeded the 5.2% increase recorded in the January-November period and surpassed the growth rate expected by polled economists.

The monthly figures suggest some fresh momentum going into 2020. Even so, “despite the recent uptick in activity, we think it is premature to call the bottom of the current economic cycle,” Capital Economics chief economist

wrote in a note.

Growth may slow further this year, possibly falling below 6%, according to some private sector economists.

Beijing has outlined significant goals for 2020: a doubling of GDP and income levels compared with the start of the decade, as well as a pledge to end absolute poverty as part of a program that the government says has lifted 10 million people annually out of the category in recent years.

—Liyan Qi contributed to this article.

Mon Jul 1 , 2019
Australians desperate for solutions to raging wildfires might find them 8,000 miles away, where a new Stanford-led study proposes ways of overcoming barriers to prescribed burns — fires purposefully set under controlled conditions to clear ground fuels. The paper, published Jan. 20 in Nature Sustainability, outlines a range of approaches […]