The rapid growth of the sharing economy has already had a significant impact on the way we live.

Instead of a hotel room, people sleep on strangers’ couches when traveling the globe; they watch movies and listen to music they never own; and they drive someone else’s car, bike or scooter as and when they choose.

“The sharing economy puts a value on making underutilized assets available to a community,” says Alex Stephany, author of The Business of Sharing and the chief executive of Beam, a sharing platform that uses crowdfunding to provide vocational training for homeless people. “It gives us more from less.”

When it comes to shared mobility, this can mean a number of things:

However, as Connected, Automated, Shared and Electrified (CASE) mobility changes the fabric of the automotive industry, manufacturers are being pressed to allocate resources to remain in the game. While electrification is a certainty, technologies such as self-driving cars and shared mobility remain elusive, not to mention capital intensive.

Nevertheless, according to Morgan Stanley the car is ripe for disruption, going on to describe it as “arguably one of the most underutilized, polluting, time-consuming, and dangerous machines on earth.”

Furthermore, the company estimates the average car is only used four percent of every day, with a per-seat utilization of about one percent. The global car fleet drives around ten trillion miles a year while accounting for 45 percent of the world’s oil demand. Quoting the World Health Organization, Morgan Stanley analysts stress that traffic congestion and road accidents lead to losses amounting to “many trillions of dollars,” not to mention the 1.3 million people who lose their lives to traffic accidents every year.

This presents a huge opportunity for any company that can come up with a solution to increase utilization, reduce traffic congestion, emissions, and road accident fatalities. Seen as a strong contender, ride-sharing is attracting vast sums in investment from OEMs, tech companies and startups alike.

Why car manufacturers want in on the sharing economy

In 2018 Ridecell, a Silicon Valley startup that provides a software platform for car-sharing and ride-hailing services, forecast that such business models could have a market cap of $9 trillion by 2030.

That’s six times the estimated current market cap of all automotive companies, according to Mark Thomas, Ridecell’s vice president of marketing and alliances.

And in a world where private ownership of vehicles is expected to fade, it is no wonder motor manufacturers are rushing to invest in this emerging transport sector. 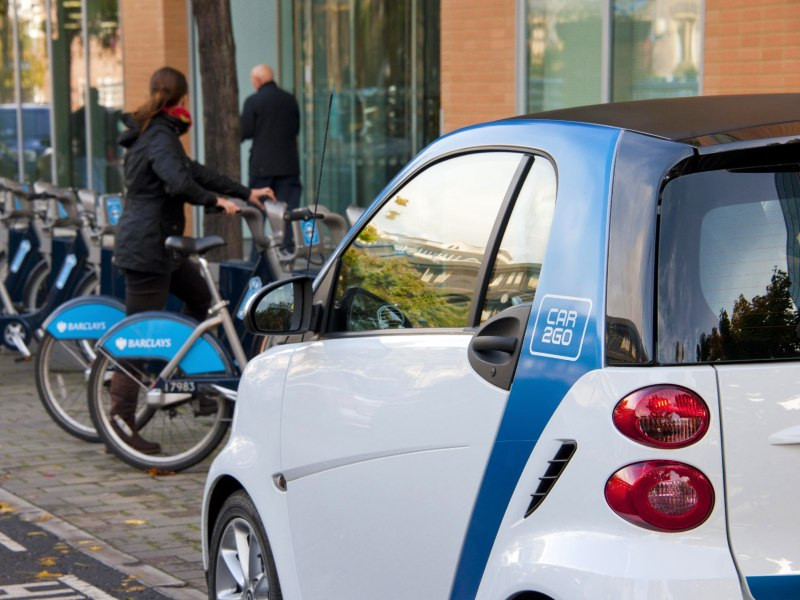 Volkswagen Group has launched not one but two mobility services in 2019 – its van-based ride-hailing service called MOIA launched in Hamburg and Hannover, while its EV-only car-sharing service, We Share, debuted in Berlin and will be rolled out around the world in due course.

Not to be outdone, Toyota has embarked upon a plan to switch from carmaker to mobility services provider. In August 2018 the company invested $500 million in Uber. Less than a year later, in April 2019, Toyota announced a further investment of $1 billion in Uber’s Advanced Technologies Group to accelerate the development and commercialization of automated ride-sharing services.

Toyota has also invested $1billion in Southeast Asia’s shared-mobility leader, Grab. In response, Hyundai has also invested an undisclosed amount to have its eco-friendly cars form part of the Grab fleet, with Honda also investing in the ride-sharing service.

Elsewhere, General Motors injected half a billion dollars into Lyft in 2016, while also pursuing its own robotaxi program with its Cruise Automation unit.

With the depth of OEM investment in ride-sharing one could be forgiven for thinking that success was a foregone conclusion – not so. While everyone seems to be investing, there have also been disinvestments with even more companies, propped up by venture capital and under-subscribed IPOs, suffering significant losses.

While some car-sharing operations in North America, particularly peer-to-peer services, have expanded, others have struggled:

There’s no doubt that the sharing economy has had a very rapid and very disruptive impact on the lives of – particularly urban – consumers. As a result, it’s no surprise that the carmakers have jumped at the opportunity to invest in what appears on the surface to be a new, very large revenue stream.

However, the new mobility industry isn’t an easy nut to crack, as you can already see with the number of high-profile OEM-based mobility solutions that have fallen by the wayside. So how have the likes of Uber and Lyft appeared to succeed?

A Lithium-Ion Battery That You Can Scrunch

Tue Apr 9 , 2019
Bend, roll, twist, scrunch, fold, flex. These are terms we might use to describe a lithe gymnast doing a complex floor routine. But batteries? Yet these are precisely the words the company Jenax in South Korea wants you to use when talking about its batteries. The Busan-based firm has spent […]