Perhaps the biggest highlight of the 2020 Montreal Auto Show came early on media day, as Ford’s long-awaited Mustang Mach-E made its official Canadian debut this morning.

In Ford’s view the new model represents an expansion of the Mustang lineup, though it’s not clear the Mach-E’s main buying demographic will be the same as it is for the other versions of the legendary muscle car.

That said, the resemblance between car and SUV is unmistakeable. The long, boldly sculpted hood, aggressive headlights and the distinctive tri-bar rear lights all tell you in so many words that this is a Mustang. But of course, It’s an SUV. And it’s all-electric.

Ford will retort, and they’re right, that power and performance are just as big a focus with this model as it is with the pony car. And so the total output of the Mustang Mach-E is 332 hp (in AWD configuration, with the extended-range battery pack) and 417 lb-ft of torque. There will also be two higher-performance versions, the GT and the GT Performance Edition.

The Mach-E also offers drivers three different drive modes, called Whisper, Engage and Unbridled; each of them has unique parameters to deliver the driving dynamics desired. Those parameters alter not just the steering control and such but also the ambient lighting, visual cues on the screens and dials and the sounds produced by the electric powertrain. Speaking of screens, the Mach-E’s massive 15.5-inch touchscreen is part of the company’s next-generation SYNC system. Here’s a look at that:

Another notable feature is the front trunk storage unit under the hood. It can fit 136 litres of stuff, and if that stuff happens to be liquid or melt, know that the unit can be drained.

Tech-wise, a clear highlight is the Phone as a Key function that Ford is debuting with the Mach-E. It means the vehicle can detect a user’s smartphone via Bluetooth on approach, unlock the doors and give the driver the ability start driving without a fob and without getting their phones out of their pocket. (If your phone battery is at 1%, rest assured: you can enter a code on the touchscreen to get the vehicle going). The Mustang Mach-E will be offered with either of two battery systems: a Standard Range version (75.7 kWh battery) and an Extended Range version (98.8 kWh). As for the range of this EV, it’s estimated at 475 km with the bigger battery; obviously real-world driving will tell us how that plays out, especially during our winter months.

The Ford Mustang Mach-E is set to debut later this year. 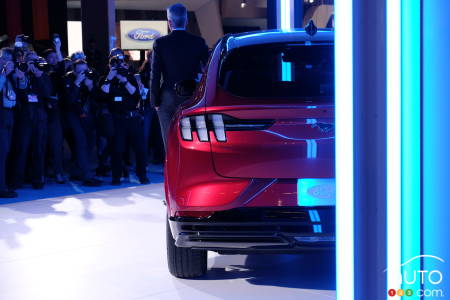 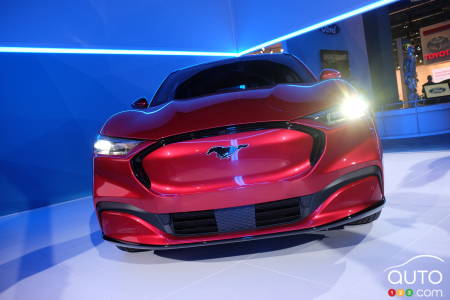